The expansion of a dilute gas through a gasdynamics convergent-divergent nozzle can occur in three different regimes, depending on the inlet and discharge conditions and on the type of gas: via a fully subsonic expansion, via a subsonic-supersonic flow with transition to supersonic flow at the minimum area section or via a subsonic-supersonic-subsonic expansion embedding a compression shock wave within the divergent portion of the nozzle. Modern thermodynamic models of molecularly complex fluids operating in the non-ideal regime indicate that eighteen additional different flow configurations are possible, each including multiple compression classical shocks as well as non-classical rarefaction ones, also called negative shock waves. These exotic configurations can possibly occur in compressible flows of molecularly complex fluids such as hydrocarbons, siloxanes or perfluorocarbons operating close to the liquid-vapour saturation curve and critical point. 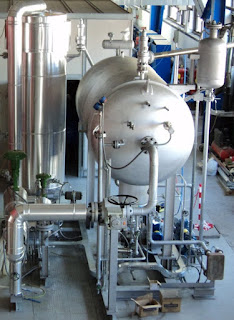 The experimental observation of one only of these eighteen flow configurations would be sufficient to prove for the first time that non-classical gasdynamics phenomena are indeed possible in the vapour region of a fluid with high molecular complexity. The first-time observation of non-classical gasdynamics flows in a gasdynamics nozzles is the goal of the NSHOCK project. If successful, the present research will establish a completely new branch of gasdynamics and will open the way to further investigations of the diverse non-classical waves that were predicted by theory more than one hundred years ago and never observed experimentally.  To this purpose, a modification to the blow-down wind tunnel for dense gases at Politecnico di Milano is proposed to use mixtures of siloxane fluids. A new real-gas total pressure probe is used to measure the flow total pressure inside the nozzle. The new probe is an evolution of a similar design to which I contributed. Measurements are complemented by numerical simulations of the expected flow field and by state-of-the-art uncertainty quantification techniques. 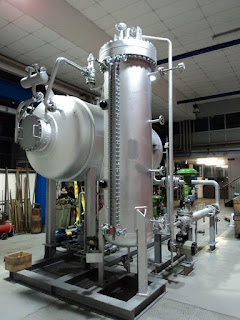 The distinctive feature of the proposed experiment is the adoption of mixture of siloxanes as working fluids. Mixtures of siloxanes are well known to be more stable than their pure components if the thermal stability limit temperature is exceeded, due to the redistribution process occurring at high temperature. The use of mixture of siloxane fluids will also allow to control the thermodynamic property of the working fluid and hence the gasdynamics by varying the composition of the mixture in a virtually continuous way.  The increased understanding of real-gas fluid dynamics will enable to improve existing industrial processes and machinery such as Organic Rankine Cycle Engines, with applications including small scale energy production from biomasses, heat recovery, binary geothermal systems and concentrating solar thermal power plants.
The NSHOCK project is funded by the European Reserach Council under ERC Consolidator Grants , ERC-2013-CoG, panel PE8